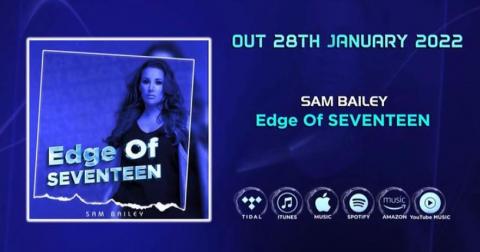 Sam Bailey is delighted to share she has just released her cover of Stevie Nick’s Edge of Seventeen. Overjoyed to be trusted with such a well-loved song, 30 years on from its original release, Sam said she was “blown away” when she realised she was going to cover it, as organised by Saga Entertainment.

The news of the release follows a successful 2021, where the Leicestershire-based musician also released a cover of Alannah Myles’ Black Velvet and is currently starring as Mrs Potts in a UK and Ireland tour of Disney’s Beauty and the Beast, The Musical.

Sam added: “It’s iconic and of course, no one can better the original. But when I walked into the studio and witnessed just how professional the band was, I mean, we’re talking the best of the best, it was a little overwhelming.”

Edge of Seventeen struck a chord with Sam, as the song symbolises the transmutation of love and loss, an experience close to Sam’s heart after previously paying tribute to her late father with Black Velvet, released last August.

Describing that singing is like an outlet for pent-up emotion, Sam also said: “My life is pretty crazy, I’m always running around from project to project, singing is such a catharsis, it’s what I was born to do.”

Since winning The X Factor, Sam has continued to soar in popularity, releasing her debut album in 2014 before turning her hand to a different kind of stage – one of theatres and musicals.